Google makes it easier to search with the new Chrome feature, Side Search.

When searching with Google in Chrome, you have to hit the "back" button to return to results or stick with opening results in a new tab.

In the latest build of Chrome Canary, there are three new flags in chrome://flags in relation to the new feature, Side Search. All three flags expand features on the "side panel" to the right side of the browser, letting you access your bookmarks, reading list, and side search. The last feature is what you want to enable to get the feature.

Once enabled, you'll see a newly added button with Google's "G" logo when you search on Google. Clicking this button opens a panel to the left of your current tab.

Google has enabled this feature to Windows, Mac, and Linux devices and will be available to everyone using Chrome 100 or Chrome 101 later this year.

49% of Twitter Users from the United States are Lurkers

As defined by Pew Research Center, Lurkers are infrequent Twitter users who post less than five tweets per month since they first opened their account. When lurkers tweet, they are also likely to reply to someone else's tweet than post their own. These most infrequent tweeters are adults from the United States. 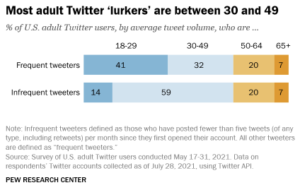 Lurkers are more interested in discovering other points of view rather than sharing their own.

Among infrequent tweeters, 13% say discovering other points of view is their primary reason for visiting the site, compared to only 5% of more active tweeters sharing the same feedback.

Replies also make up 51% of lurkers' tweets, compared to 30% of more active tweeters, though retweets are at a smaller percentage in comparison.

This new feature lets Pinterest creator repurpose their Story-like content with multiple communities by sharing their creations across platforms.

"Idea Pins are Pinterest's native publishing format that was first introduced to creators in 2020 and rolled out globally in 2021. Idea Pins are a multi-page canvas to share unique ideas, tutorials, passions with others. They last forever, and are a way for creators to grow an audience on Pinterest. In Pinterest's "Watch" tab Pinners find a full-screen feed of Idea Pins to scroll through and engage with fresh content from brands and creators, so Idea Pins continue to be discoverable by everyone... Now, with the new Idea Pin sharing option, a creator's original Pinterest content can go even further reaching new audiences on and off Pinterest."

Since the release of idea pins last year, Pinterest continued to improve the tool with the new video and photo editing options.

This update comes from the latest Search Off the Record podcast episode by Danielle Marshak, Google's Product Manager, who oversees videos in search results. Marshak was joined by two members of the Google's Search Relation team, Gary Illyes and Lizzi Sassman.

Marshak states, "And this format, it's really cool because as I mentioned, it is very concise. You can get a lot of information in a short period of time, and you can also get a loot of different views and perspectives…

So we think this kind of content could be useful for a lot of different types of search queries, and we've been experimenting with how to show it to users more often."

Google will surface short-form videos more by crawling and indexing them like any other piece of content.

Listen to the full discussion on videos in Google Search through the podcast below.

WordPress announced the release of the new plugin called Performance Lab, designed to help WordPress sites speed up. The plugin lets publishers test it out and provide feedback before they are included in the core WordPress itself.

Performance Lab plugin aims to help publishers speed up their website and diagnose issues that may be causing their sites to slow down. Features are created as modules so users can select which ones they want to explore.

The four plugin modules are:

The new features are intended to make it to a future release of WordPress eventually. Releasing them early through a plugin can help them gain insights prior to that future plan. You can download the plugin here.

AdSense added a new unit to help drive users to more relatable elements on your site.

Google added a new feature to its AdSense suite, Related Search for Content. 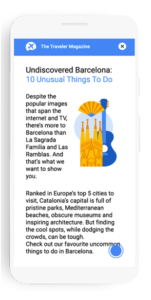 This new ad unit works as a suggested content type prompt on your website, redirecting users to more relevant pages within your site based on the content they are viewing.

As explained by Google, "Related search for content is a contextual navigation unit that shows users search terms related to the page they're viewing on a publisher's website. When they click a search term, they're taken to a search results page on the publisher's site where they can explore other relevant topics, including search ads. As a result, Related search for content can help publishers increase site engagement – including site traffic, pageviews and ad impressions – and drive incremental revenue."

How to Run a Successful PPC Campaign to Get More Sales PPC is an excellent investment, but only when it's done correctly. You need to do it right the first time, so you don't waste time and resources. Taking out the guesswork is simple when you follow the steps we already use to effectively launch campaigns for our clients.

How Has On-Page Optimization Evolved Over the Years? On-Page SEO has come a long way, and it has changed significantly over the years. As an advertiser, you need to adapt to changes to stay top of the search engine game.