This week on the latest digital marketing updates: New Google Search feature for event promotions, post scheduling feature on Instagram, new ad placement option for Instagram advertisers, add custom data to your reports on GA4, and manage the frequency of ads on YouTube.

John Mueller, a Google Search Advocate, predicts the future of backlinks during a live talk at Brighton SEO.

During a live session of the Search Off The Record podcast, Myriam Jessier, Lizzi Sassman, and Mueller take questions from the audience. Since it's a podcast, the hosts respond to pre-selected questions rather than interacting with the live audience, therefore the questions are addressed as a group discussion.

The hosts respond collectively to the following question regarding Google's backlink penalties:

“As an SEO, we are interested in backlinks. However, actively working on backlinks often becomes a gray area in terms of link schemes. What are Google’s main criteria for penalizing backlinks?”

After some lighthearted banter between the hosts, Mueller deviates just a little from the original question in his response. When answering inquiries about ranking and punishment factors, Google representatives are frequently circumspect.

Google generally opposes any kind of artificial linkbuilding. Giving away too many specifics about the punishments could encourage "grey hat" behavior or carefully navigating the line between what is and isn't permitted.

Mueller talks on the backlinks ranking signal in general and why it might be less important in the future for SEO specialists rather than discuss penalties.

Mueller contends that Google's algorithm won't need to rely as heavily on inbound links as it does now as the search engine gets better at figuring out how content fits in with the rest of the web.

Mueller opines, “Well, it’s something where I imagine, over time, the weight on the links at some point will drop off a little bit as we can figure out a little bit better how the content fits in within the context of the whole web.”

Perhaps Mueller is arguing that since fines aren't important now, they won't be in the future when backlinks are less lucrative to obtain.

However, claiming that backlinks simply aid in content comprehension ignores all of the additional information they convey.

A website's backlink profile may tell you a lot more about it, including how widely it is trusted, who it is trusted by, and how authoritative the site is in its specific specialty.

Is Google able to discern all that from the on-page content alone?

Mueller hasn’t commented on the inbound links' authority component, although he does state that Google will continue to benefit from them for content discovery.

“And to some extent, links will always be something that we care about because we have to find pages somehow. It’s like how do you find a page on the web without some reference to it?”

But my guess is over time, it won’t be such a big factor as sometimes it is today. I think already, that’s something that’s been changing quite a bit.”

Google has announced that businesses can now register for new . rsvp domains, which could make it easier for people to remember the URL to connect to your upcoming event.

You can now use get.rsvp to register an .rsvp domain for your business, especially if you need your guests to confirm their attendance or plans with you. With this, you can have "socialmediatoday.rsvp" as your domain name.

Google says that .rsvp domain names are currently available as part of its Early Access Program, with all domains soon to be made publicly available, at variable fees.

How to use it

On the site, you can check for availability of your chosen .rsvp URL: 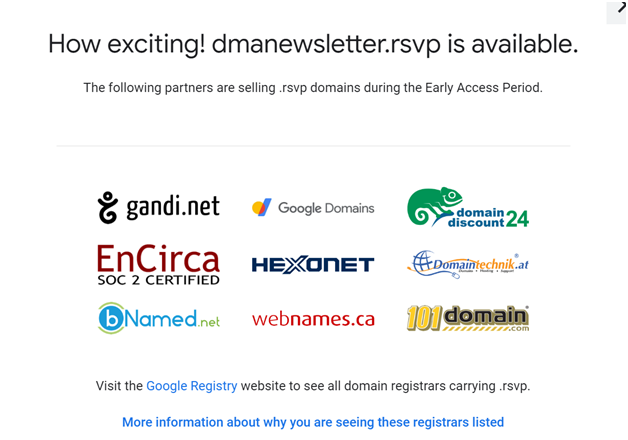 After that, you can pay a one-time charge to register the domain name with the service provider of your choosing.

The link will then go to your website or a special page you design, and you may utilize that domain as a referral driver for your event registration or promotions.

Instagram users will soon be able to plan posts and reels in the mobile app.

Professional Instagram users can schedule posts and clips directly from the mobile app up to 75 days in advance. 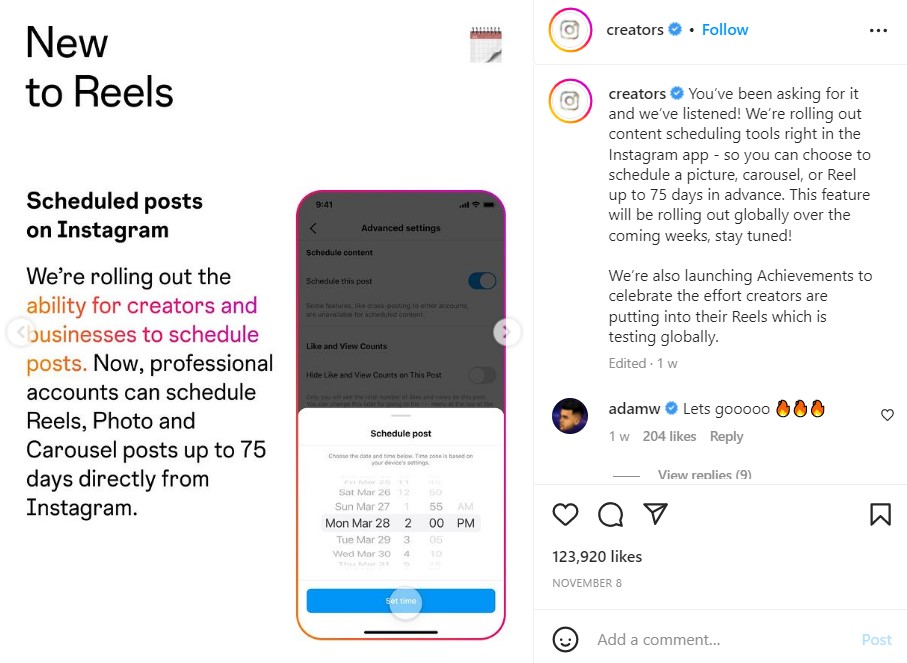 Instagram postings couldn't be scheduled in the app up until now. Previously, users had to use desktop programs like Meta Business Suite or go through third-party apps. Now, all you need is the iOS or Android app already installed on your phone to schedule Instagram content.

In the Instagram app, you may plan a photo, video, carousel, or reel up to 75 days in advance. This update allows you to use your time more efficiently by publishing to Instagram without being physically present.

Tap Schedule after choosing the time and day you want the material to go live. Your content is now ready for publication.

Publishing more frequently during prime engagement hours is one way to benefit from scheduling posts on Instagram. Determine the times of day when your audience is most active and regularly provide content at those times.

Google is rolling out a new feature in Google Analytics 4 that allows you to add custom data to your reports.

You can now add any custom dimensions and metrics to GA4 reports that are defined in your Google Analytics property.

How To Add Custom Dimensions & Metrics To GA4 Reports

Click the customize report button (it looks like a pencil) in the top-right corner of any report or select Library from the left navigation menu to get to the Google Analytics report builder.

Next, select "Create detail report" from the drop-down menu when you click +Create new report in the reports table.

Choose Edit or Make a copy from the drop-down menu after that. Now, the screen should display the report builder.

Google is giving advertisers more control over how often consumers see their ads on YouTube with the release of target frequency. Previously, running connected TV campaigns in Google Display & Video 360 was the only way to manage the frequency of ads on YouTube.

In a blog post, Google explains how target frequency can help advertisers reach their goals without annoying viewers with too many ads:

When displaying the same advertisement to people again, there is a chance of diminishing returns. After a while, viewers will start to tune out, which will result in less purchases being generated by the increased impressions.

Google admits that having the same advertisement appear again is annoying for viewers and inefficient for advertisers.

According to a study funded by Google, the ROI of TV advertisers falls by 41% when their frequency exceeds six or more weekly impressions, which accounts for 46% of all TV impressions delivered.

With basically half of the impressions wasted, Google says:

“Almost half of the linear TV impressions in our study were considered waste but the same study from Nielsen shows that brands can increase their average weekly frequency from one to three on YouTube with a consistent ROI.

This is a huge opportunity for marketers to maximize their impact across the same set of people they are already reaching today.”

Google wants to help advertisers increase impressions with target frequency while minimizing the impact on ROI.

Advertisers can choose the frequency objective, and Google will optimize for the greatest number of unique views at that frequency.

When put up using suggested best practices, Google claims that over 95% of target frequency campaigns on YouTube fulfilled their frequency goals during testing.

The target frequency feature is accessible to all Google Ads marketers globally.

Create a new video reach campaign with the aim set to target frequency, then choose the desired weekly frequency to begin utilizing a frequency-optimized campaign.

Based on your desired audience, budget, and other criteria like geography and ad types, the tool forecasts how your media plan might succeed. Forecasts are based on market trends for advertising and past results of comparable campaigns.

You can now add Video Action Campaigns to your current plans and choose "Action - Online Conversions" as an objective when building up your plans in Reach Planner. With this launch, you can now create plans for a full-funnel YouTube strategy to get the most out of your ads and plan your campaigns across the funnel, from awareness to action.

According to a personalized Nielsen meta-analysis, clients that used a full-funnel YouTube approach generated a 10% greater ROI than those who used solely awareness advertising.

A new ad placement choice for the Instagram Explore page was recently unveiled by Meta.

On October 4, 2022, Meta declared that companies could officially run advertisements on the Instagram Explore front page.

The October announcement explained: “Businesses can now place ads in Explore home, the grid that people see when they first arrive on the Explore tab.”

Instagram also announced the introduction of the Explore home advertising:

“We’re introducing more places for people to discover brands and products in Explore and profile.

Explore home, the grid that people see when they first arrive on the Explore tab, will now feature ads to reach people in the earliest stages of discovering new content they care about.”

On Friday, November 11, Meta announced that using the Instagram Marketing API, advertisements can now be placed on the Explore home page.

This new ads placement will be available on all current Marketing API versions, and does not require an upgrade.”

As stated, there are no upgrades or changes needed and that the current APIs will work with the new INSTAGRAM_EXPLORE_HOME placement option.

The new INSTAGRAM_EXPLORE_HOME placement option can now be used to create ads. Ad performance data for the Instagram Explore home are available at the Placement level insights. Advertising can be previewed.

Meta advised that the relevant developer documentation for using the new features will be rolling out soon.

How SEO Helps Your Company Grow

In this article, we’ll show you how SEO can help you standout from the competition and grow your business successfully. Read more >

Learn all of the steps you need to do to setup your Amazon seller account quickly and get your brand up and running in no time. Read more >