Quizzes on Community posts and editing capabilities for image posts may soon be available to eligible YouTube creators.

Creator Insider revealed that they are experimenting with the ability for creators to add quizzes to their Community posts, along with expanding the editing capabilities for image posts.

Community posts let creators connect with their audience outside of video uploads. They show on the Community tab, and may show on Home or the Subscriptions feed. Community posts can include polls, GIFs, text, images, and video. For this to be available, you need to have 500 subscribers or enable access to advanced features on your channel. You can choose among three options to gain access: channel history, video verification, or a valid ID.

Quizzes introduce a new, interactive way for creators to engage with viewers, and in cases of educational channels, help them learn. The beta version of the Quiz feature is currently being tested by YouTube with a small number of creators, and they’re looking to expand it in the future based on feedback.

YouTube aims to make Community posts more visual, engaging, and fun, and so they’re also testing editing capabilities for image posts. This allows creators to add text, filters, and stickers to images for Community posts directly in the YouTube app. 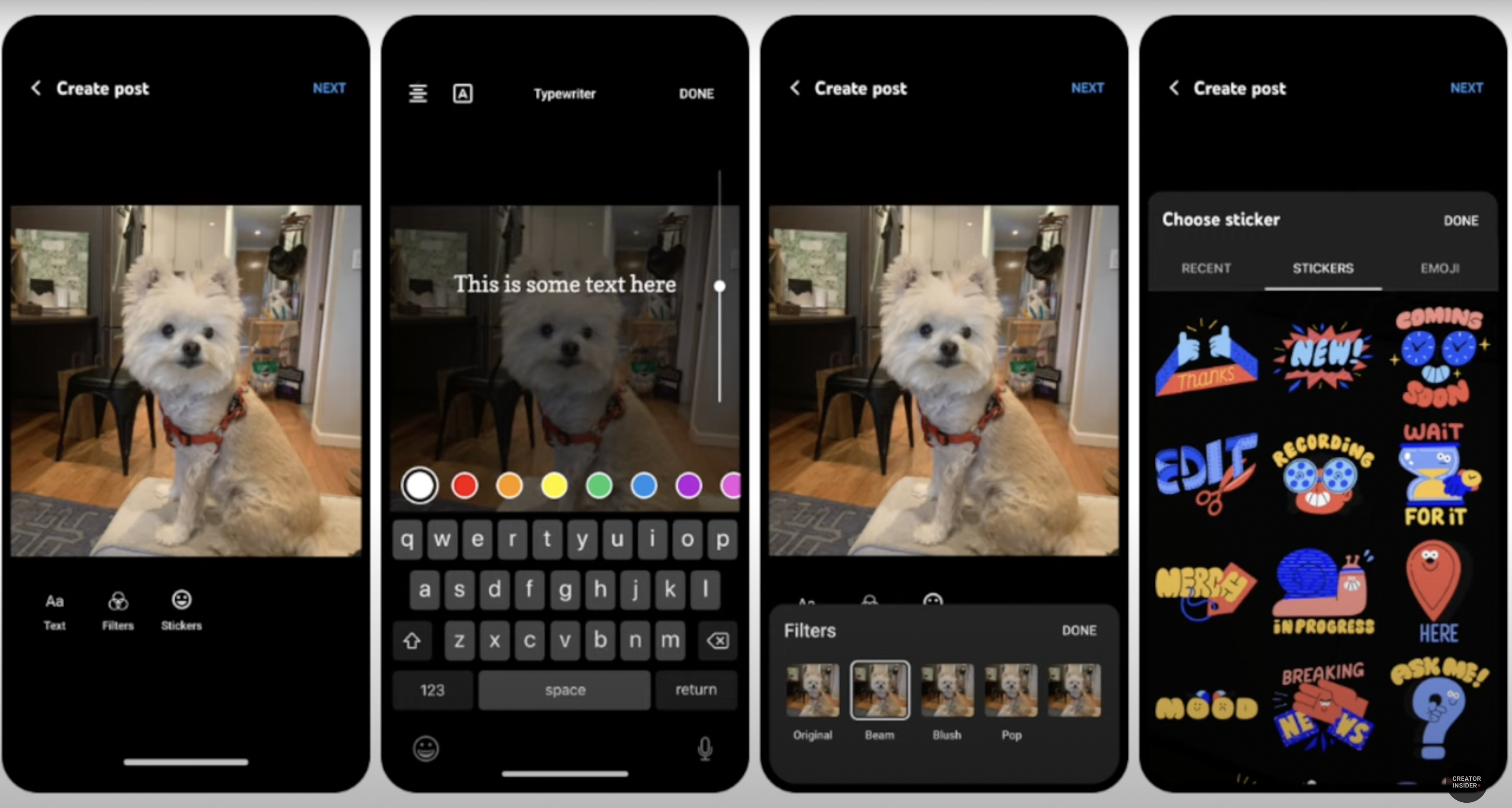 The image editing feature was made available to Android users earlier this year. Now a small, randomly-selected group of creators with access to the Community tab will be able to test this feature on iOS devices.

To learn more about the newest features on YouTube, watch this video from Creator Insider.

Twitter says that these launches build off the momentum of their new and improved Twitter Pixel, Conversion API, and App Purchase Optimization solutions, all of which they updated earlier this year. Here’s what you need to know about their newest advertising solutions:

This is a major rebuild of Twitter’s conversion goal. WCO improves the way advertisers reach customers by focusing on those who are likely to take next-step actions beyond tapping on an ad.

How it works: First, identify a specific goal that you want a user to take beyond visiting your landing page. This could be adding an item to their cart, making a purchase, subscribing to your content, or providing their contact info and becoming a lead.

Twitter’s user-level algorithms will then target with greater relevance to reach people who are most likely to meet your specific goal — at 25% lower cost-per-conversion on average, based on their initial testing. To optimize with behavior from your site, WCO requires use of the Twitter Pixel or Conversion API (CAPI). 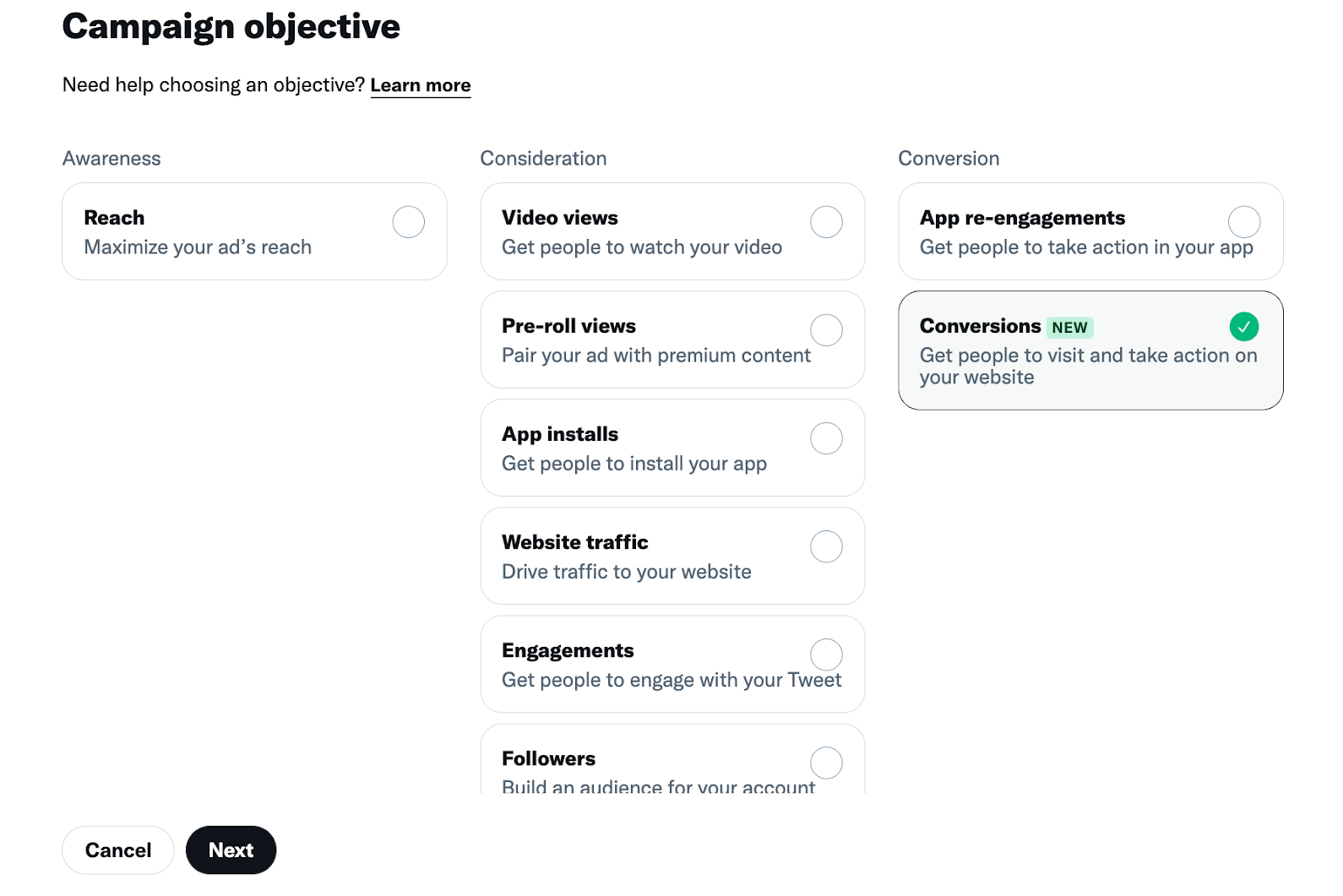 DPA helps drive sales and conversions by allowing advertisers to showcase the most relevant product to a customer at the right time.

Twitter reported that in their initial testing, cost-per-acquisition improved by 30-88% for advertisers who used Dynamic Product Ads. 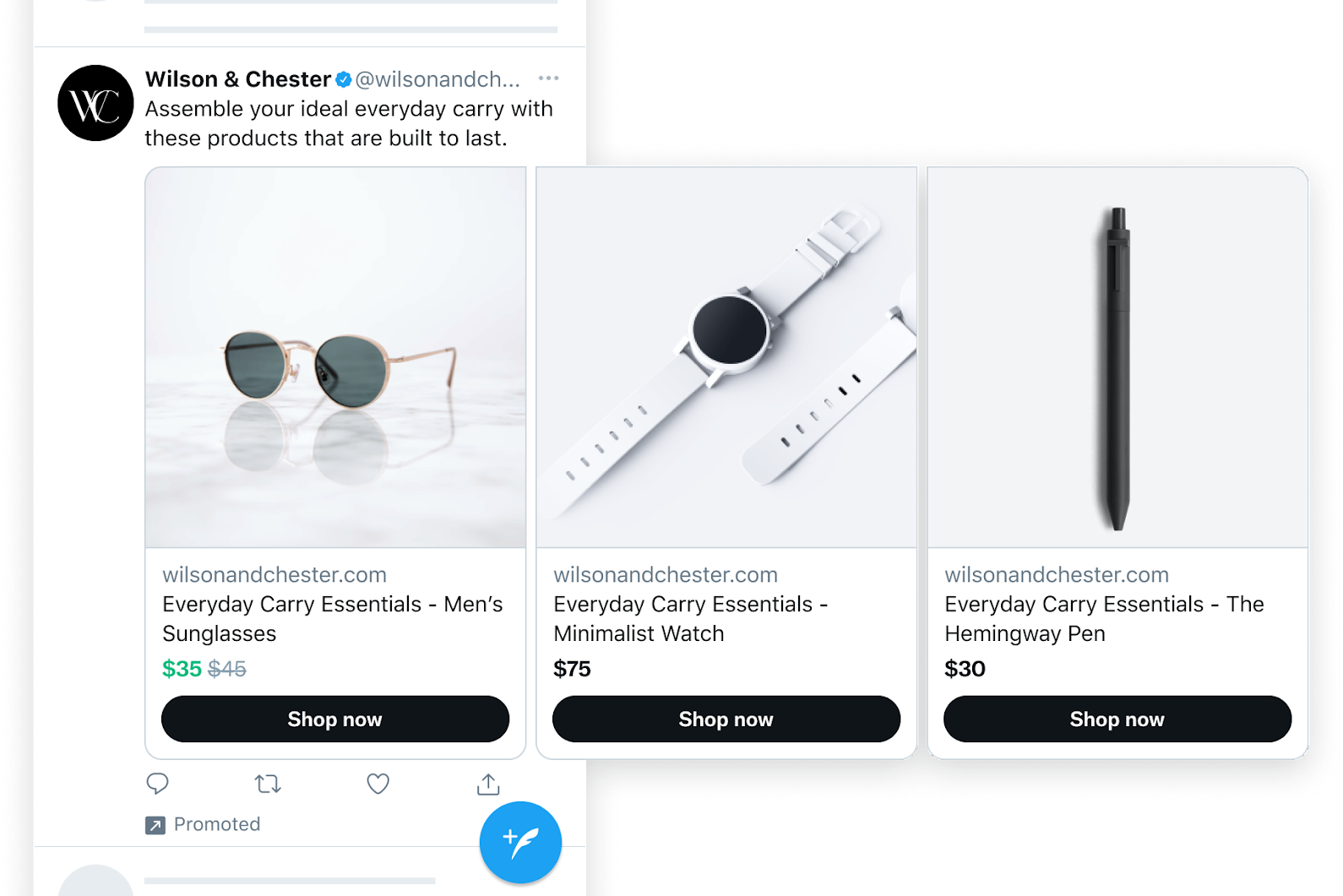 This Twitter ad format allows advertisers to showcase a collection of product images through a primary hero image and smaller thumbnail images below it.

How it works: The primary image remains static while people can browse through the thumbnails via horizontal scroll. When tapped, each image can drive consumers to a different landing page. 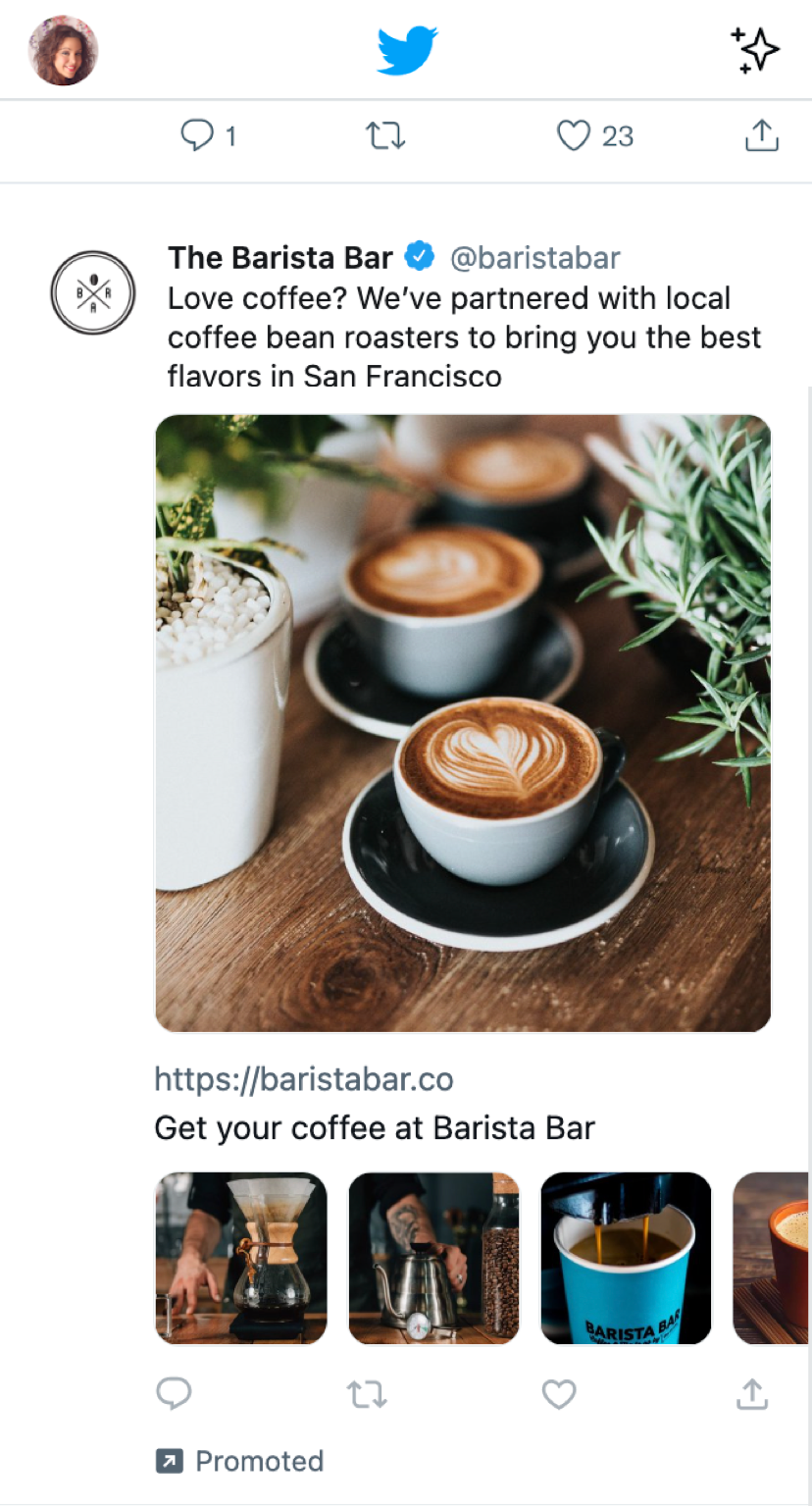 Google added a new guideline which warns users against bypassing their spam or content policies.

Google Search added a guideline to their Spam Policies called “Policy Circumvention.” Here they make it clear that even if you find ways to evade their spam prevention measures, they may still take action on your account, content, or site.

Circumvention refers to any action that attempts to bypass the other items covered in the Spam Policies of Google Search. This includes (but is not limited to) creating or using multiple sites or other methods with the intention to distribute content or engage in a behavior that Google prohibits. The Policy Circumvention guideline states:

“If you engage in actions intended to bypass the spam or content policies for Google Search, undermine restrictions placed on content, a site, or an account, or otherwise continue to distribute content that has been removed or made ineligible from surfacing, Google may take appropriate action which could include restricting or removing eligibility for some of the search features (for example, Top Stories and Discover).”

Violators may find their content being restricted or altogether removed from Google Search features. To avoid violations, regularly review and keep yourself updated on the spam and content policies of Google Search. Make sure that your account, content, and site are aligned with Google’s policies before you launch any marketing campaign.

What’s Happening With Twitter: An Update on the Elon Musk Takeover

Here’s what you need to know (so far) about Elon Musk’s Twitter acquisition.

On October 27, 2022, Elon Musk took over Twitter as its new owner and CEO. After a whirlwind of tweets and legal disputes, he acquired the social media company for $44 billion.

Let’s break down the highlights of events that led up to Musk’s acquisition and the notable changes in the company under his direction.

Note: This is a developing story and thus may not cover some events that happen after publication.

Back on March 14, 2022, a statement filed with the United States Securities and Exchange Commission revealed that Musk is Twitter’s largest stakeholder, holding 9% of company ownership. Not a month later, he was invited to join the Board of Directors. But just a few days after, Twitter’s former CEO Parag Agrawal reported that Musk has decided to not join the board. 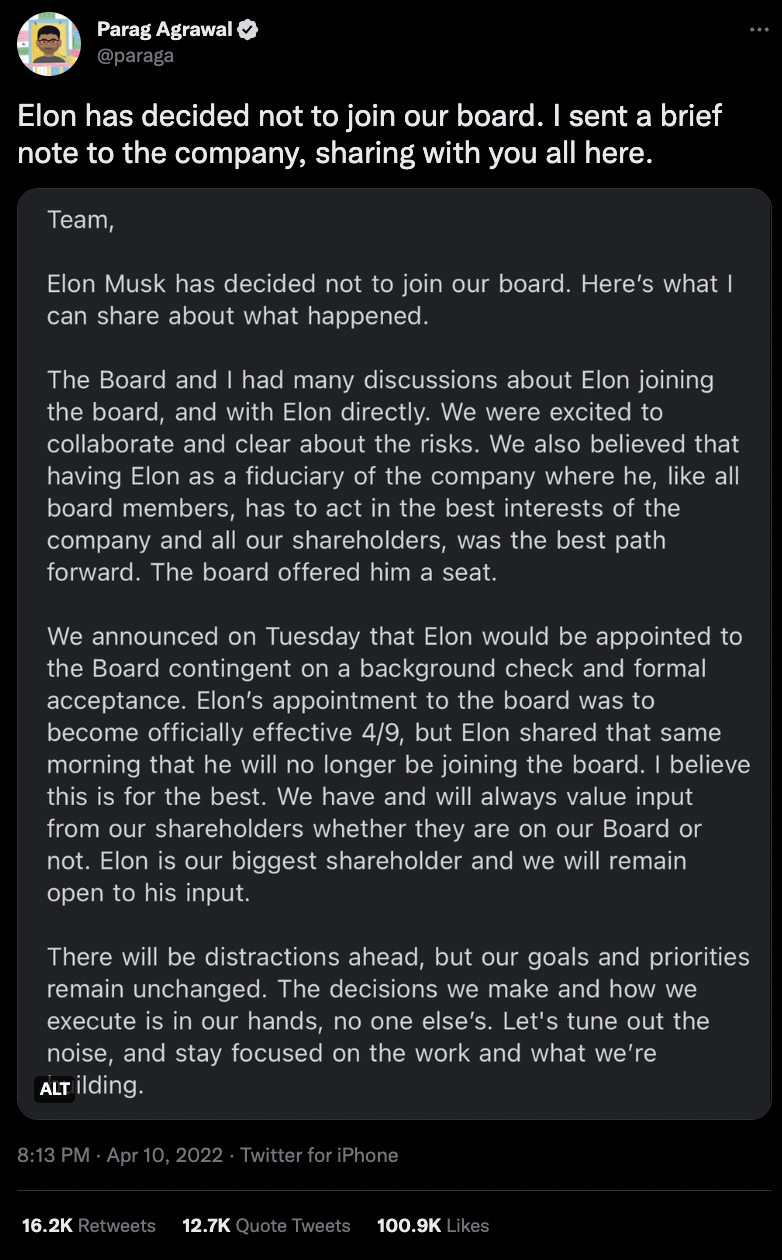 A few days later, Twitter’s board unanimously accepted Musk’s acquisition offer, announcing it publicly through a filing with the United States Security and Exchange Commission.

The first obstacle began a month after Musk’s buyout offer: he put the deal on hold after challenging Twitter’s estimation that spam accounts comprise less than 5% of users. Musk announced: 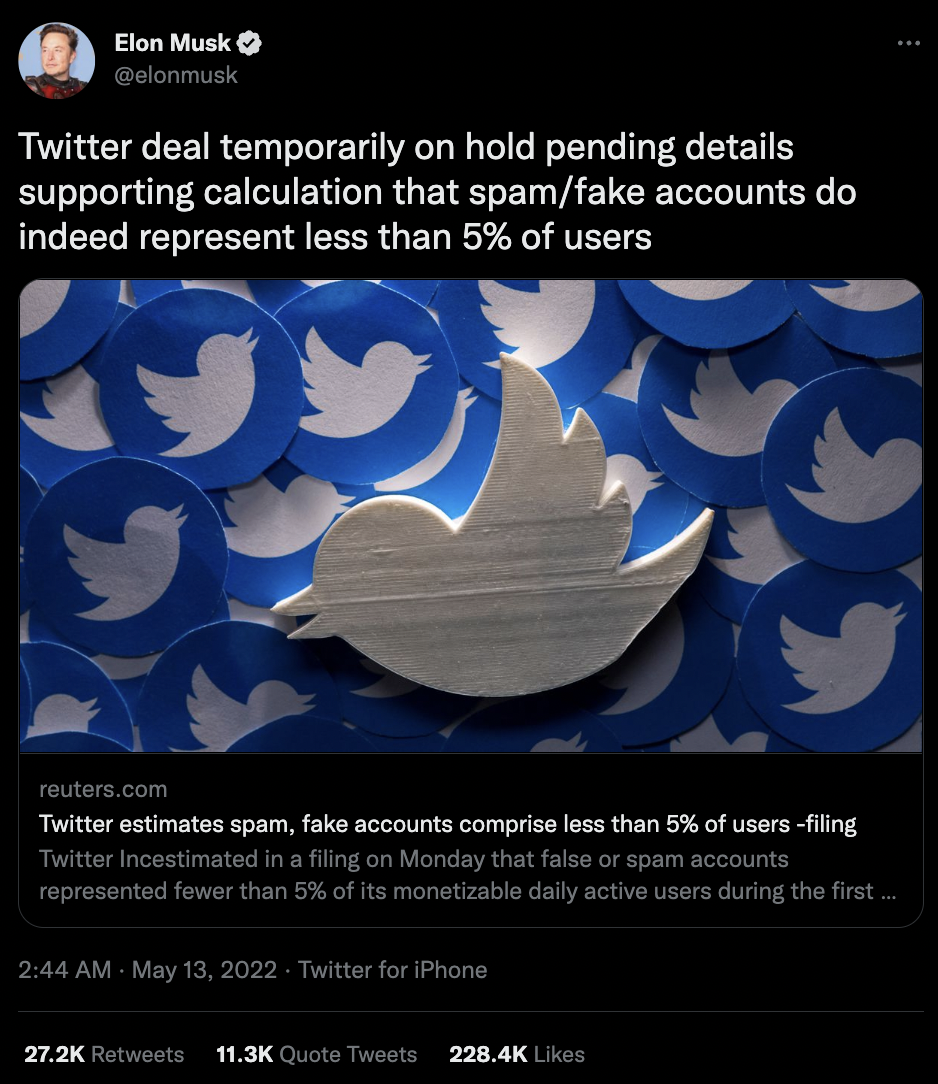 Yet on June 6, 2022, Musk's lawyer sent a letter to Twitter, wherein his camp threatened to terminate the merger agreement over the company’s refusal to provide the data he requested for. The letter states:

“Twitter has, in fact, refused to provide the information that Mr. Musk has repeatedly requested since May 9, 2022 to facilitate his evaluation of spam and fake accounts on the company’s platform. Twitter’s latest offer to simply provide additional details regarding the company’s own testing methodologies, whether through written materials or verbal explanations, is tantamount to refusing Mr. Musk’s data requests.”

As Musk announced his intention to terminate the merger agreement and abandon the transaction with Twitter, the company’s chairman Bret Taylor fired back in a tweet: 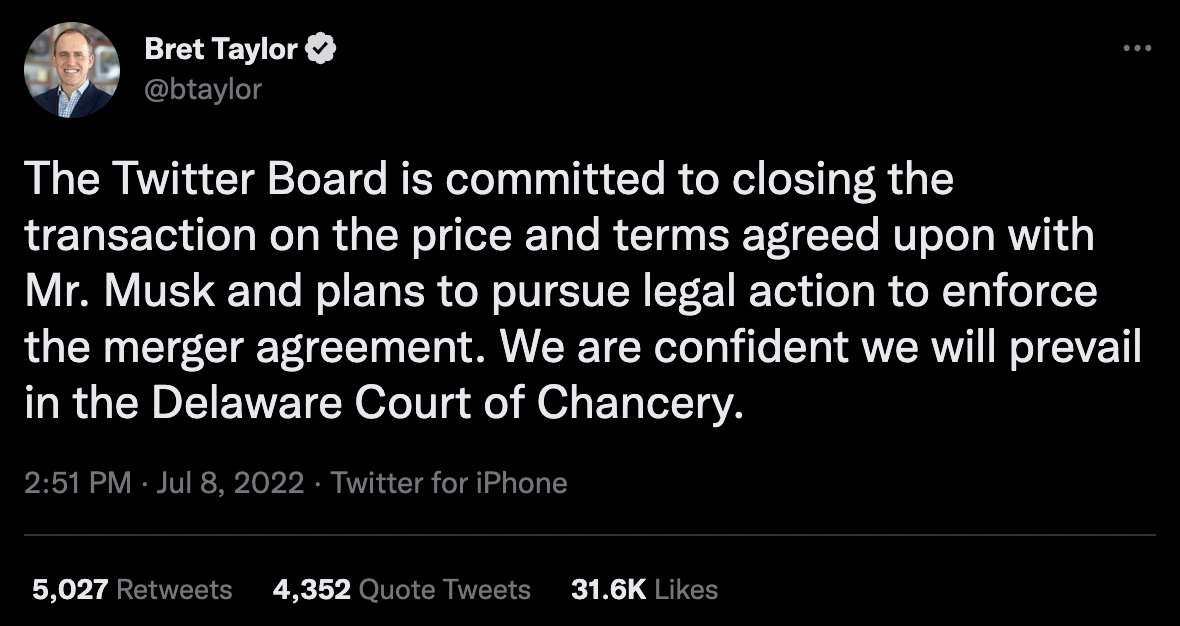 Twitter then launched a lawsuit against Musk in an effort to force him to go through with the buyout deal.

Then in October, Musk proposed to move forward with the $44 billion acquisition, provided that Twitter drops the lawsuit. Furthermore, Musk also revealed his bigger goal, which is to create an “everything app”:

Musk and Twitter finally closed the deal on October 27, 2022. Soon after taking over, CNN reported that Musk fired Twitter’s top executives, including CEO Parag Agrawal. He also began to announce changes within the app, beginning with Twitter’s verification system.

In an exchange with novelist Stephen King, Musk revealed that Twitter will be charging $8 per month for users to gain and maintain their blue verification mark. In a follow-up, Musk claimed that this is the “only way to defeat the bots and trolls.” 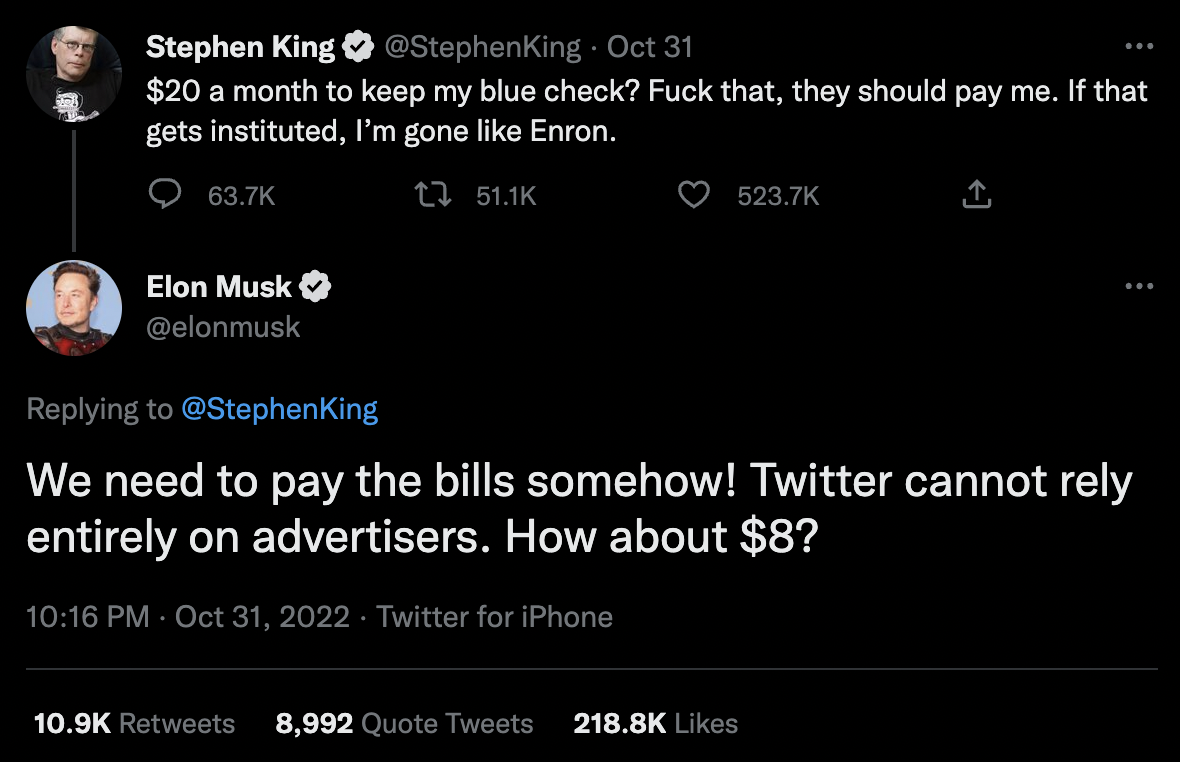 In the beginning of November, there was a massive layoff among Twitter staff. Musk acknowledged this in a tweet, saying that “there is no choice when the company is losing over $4M/day.” 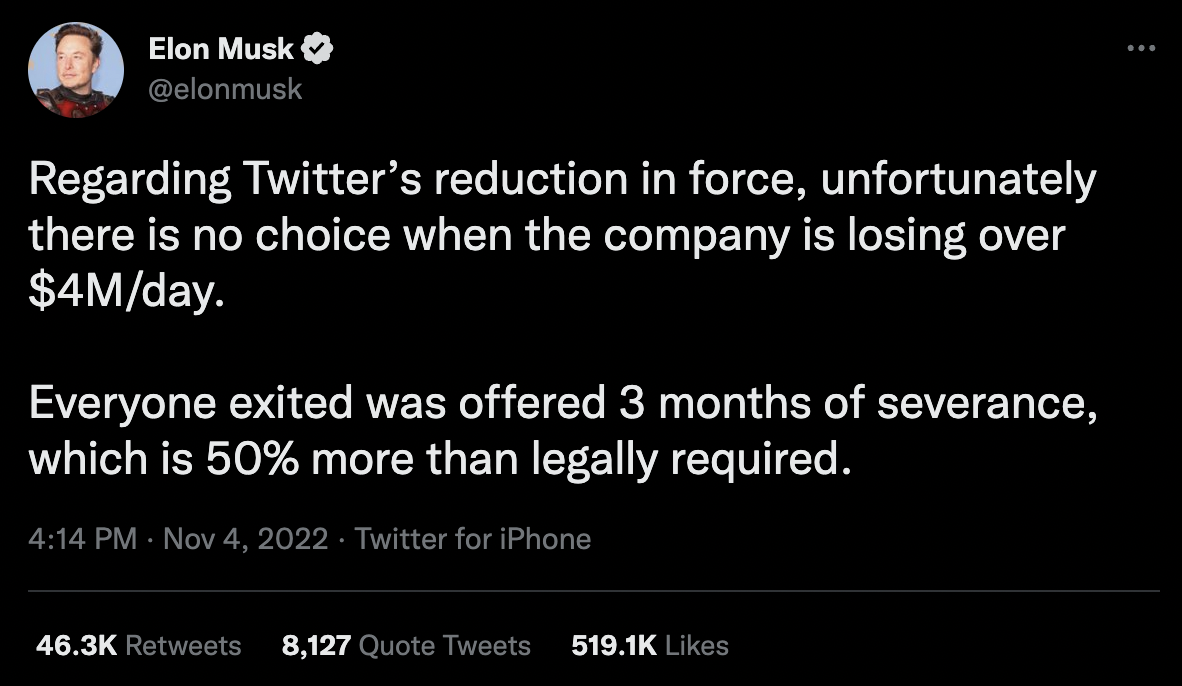 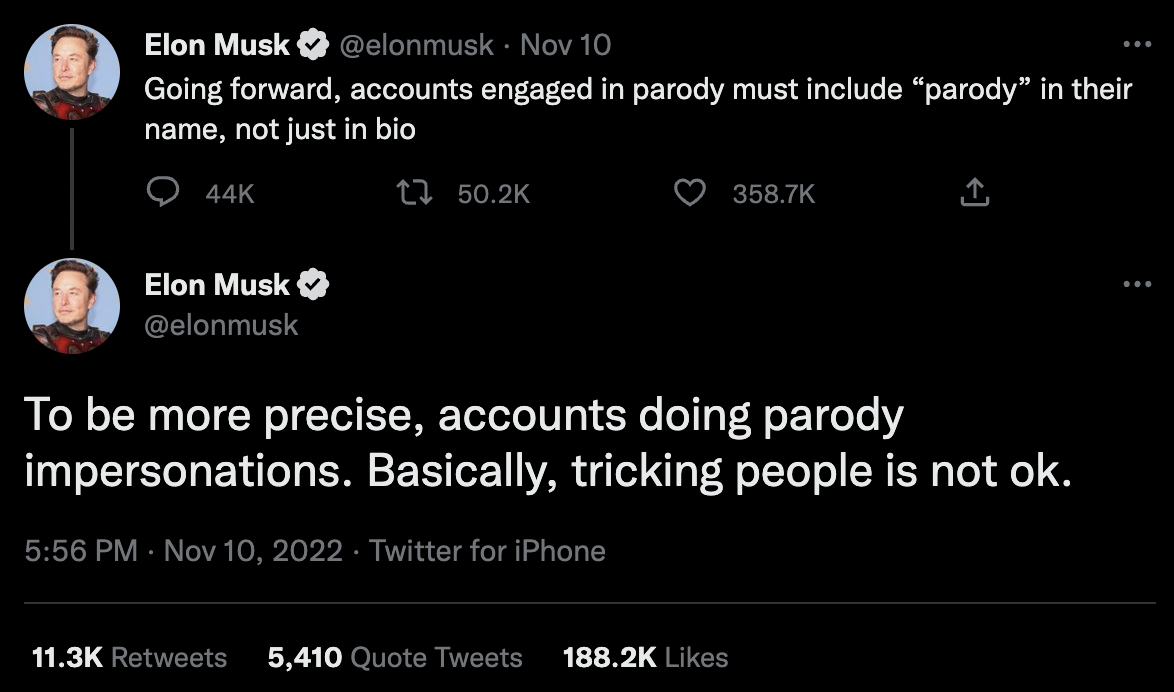 All the while, Twitter witnessed the exit of more top executives and the firing of contract employees without formal notice. The news that Twitter may shut down anytime soon also caused panic among the user community, with experts advising people to backup their app data.

On November 15, 2022, it was reported that the legal battle between Twitter and Elon Musk had officially ended as the judge dismissed the lawsuit. At the same time, Musk announced that they will launch a new Blue Verified program on November 29th:

The company also changed their Twitter Blue policy, adding that new accounts must wait 90 days before subscribing to the new Twitter Blue plan and getting verified. Twitter Blue subscribers will also be unable to change their display and user names after receiving a blue checkmark.

A few days before the scheduled relaunch of Blue Verified, Musk announced its postponement until they figure out a way to stop impersonations: 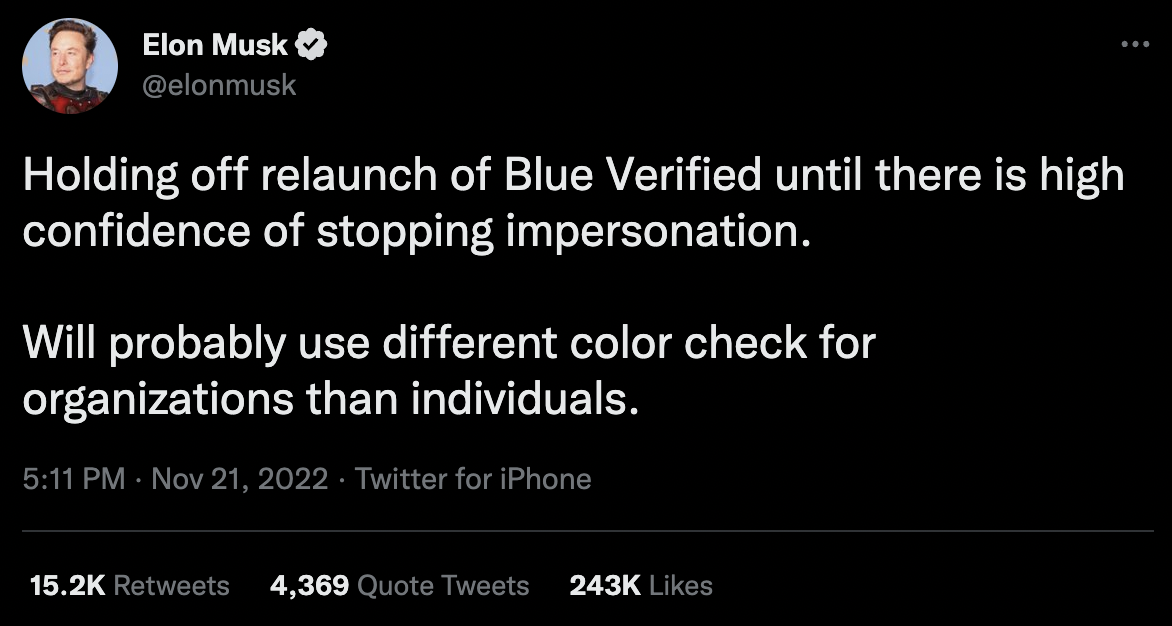 As of now, Twitter’s solution is to add a gray “Official” tick for legitimate verified accounts, as seen in the example below: 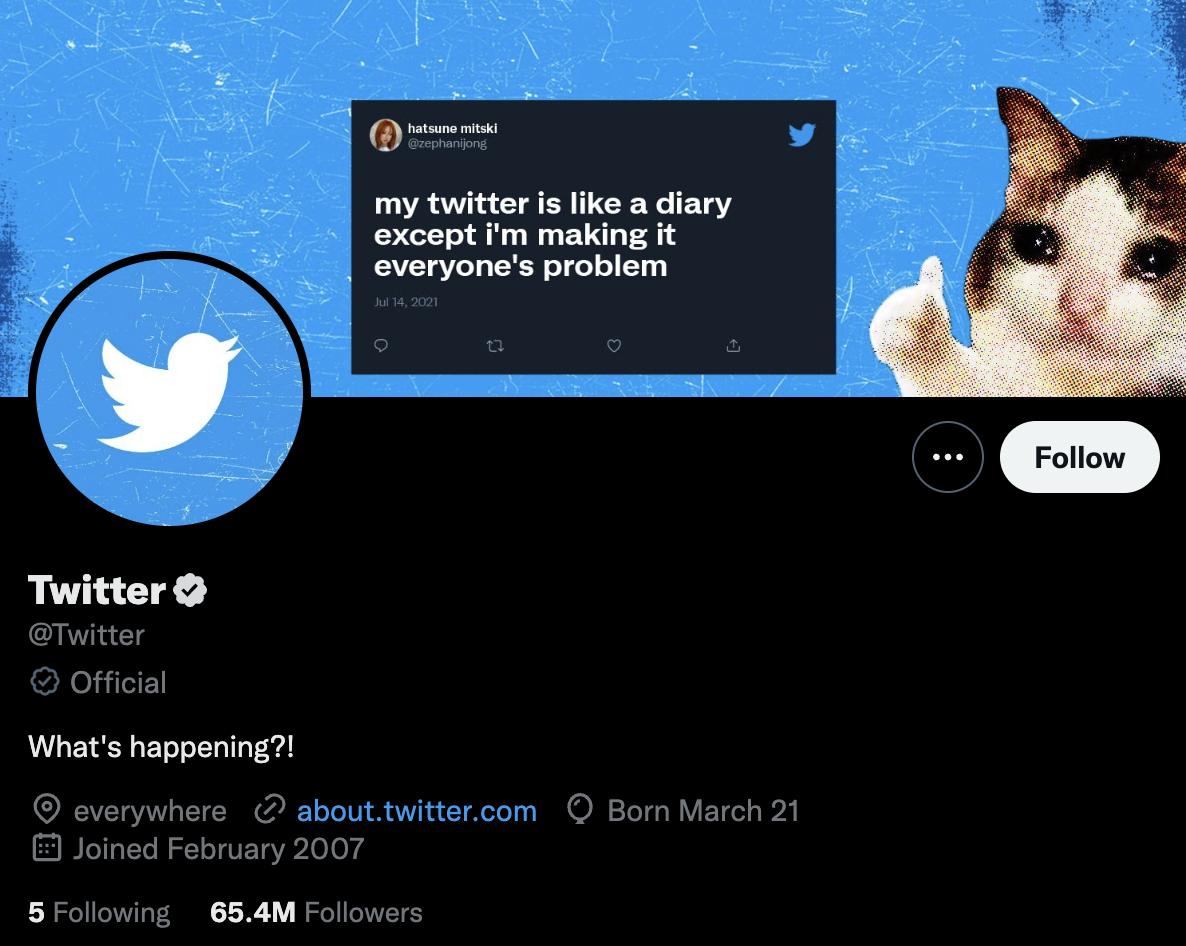 Musk revealed that plans are underway to “tentatively launch” Verified on December 2nd and they will be assigning a specific color of verification check for a particular type of account. They’ll be using a gold check for companies, gray check for the government, and blue for individuals, whether you’re a celebrity or not. 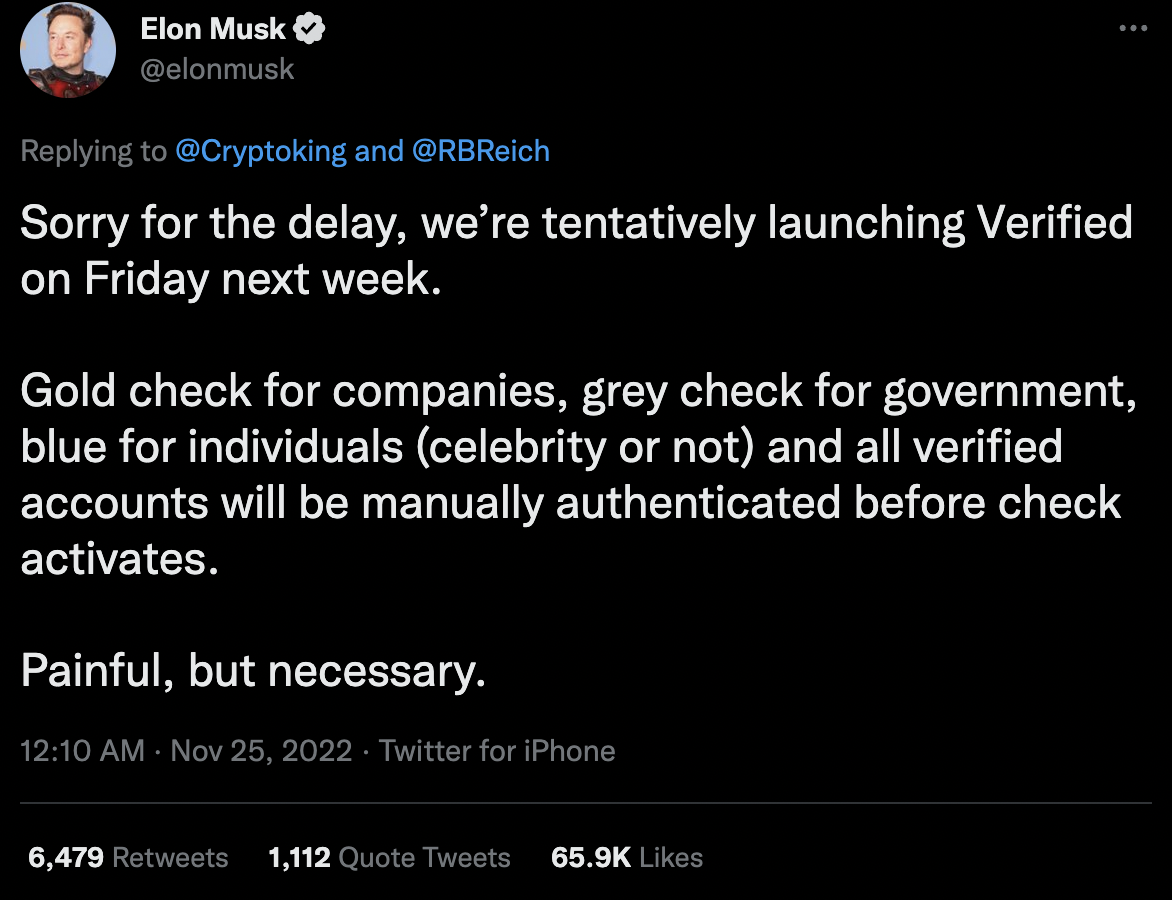 Musk has also hired security hacker George Hotz for a 12-week internship and tasked him to fix Twitter’s search engine after he volunteered his time in exchange for cost of living in San Francisco, California.

Lastly, the most recent development in this saga came just before the end of November, when Musk picked a fight with Apple over the company’s reduced ad spend on Twitter.

With all that’s happening under the new Twitter leadership, it seems that we won’t be hearing the last of this saga for a while. Stay tuned for more updates in the coming weeks!

How SEO Helps Your Company Grow

What happens when you skimp on your marketing efforts

Are you deciding between hiring a freelancer or tapping a whole team of digital marketers? We lay out the details you need to know so you can choose what’s best for your business. Read more >